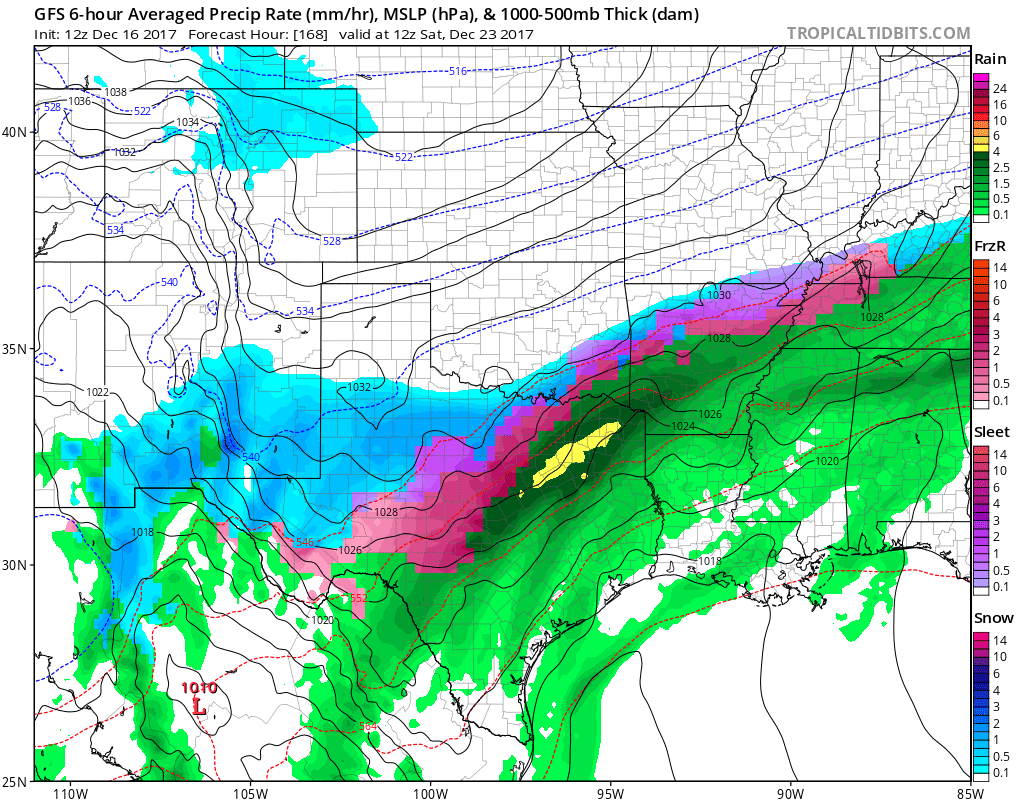 So, holding my feet to the fire, it’s time to buckle down and provide a forecast for this upcoming winter storm for the Christmas holiday. I can show you several model outcomes, but in the end, you’re going to want to know what’s going to happen, not what could happen, right?

Unfortunately the model data still isn’t clear.  I’m going to try something that really can’t be done at this point, but I’m doing it anyway and that’s to tell you what is going to happen for our Christmas Weekend. After all, it starts in just 7 days. So hang on tight…

First thing I wanted to show you is the same day in time, Friday Dec 22, from 3 models in the upper atmosphere. The energy (bright colors associated with the upper low/trough axis) is across the southwest part of the country. Now, the speed, the direction it approaches from, and the latitude, whether it’s Mexico or the 4 corners area, all play a part in the final outcome. Each shift in any of these variables creates a dramatic change to the precipitation across Oklahoma and Texas.

GFS model, slow and closed off.

Each model does produce precipitation in these outcomes, but very light for the first 2, while the last one produces much more. Here’s the surface precipitation type output from the most aggressive model with this storm system (Sat/Sun mornings shown)

So what are the takeaways and where do we go from here? Here’s the forecast (which will be fine-tuned over the coming days):

I think the storm system won’t move through as fast as models predict. It will dig a bit more south, but not as much as the GFS model shows. When the storm comes across, it won’t be as sheared out either as indicated by the Canadian and European models. This means a solution closer to the output shown above but with everything shifted north a hair. A very large area of snow will develop across NM Friday and spread east to AR during the day and will continue off/on through Sunday (Christmas Eve). Freezing rain and sleet will be the dominate precipitation type for N and C TX that will begin by Friday morning. This includes the DFW area. Some snow will occur as well, but ice is the main threat down there. Still too early to talk amounts, but ballpark figures would be 1/4″ to as much as 1″ of ice in the hardest hit remote areas of that geographical region. As far as snow goes, up to 10″ across the W TX area. Oklahoma would get a light dusting across the N 1/3 of the state, a couple of inches in the middle, and the bottom 1/3 up to 6″.  The exception would be near the Red River and to the SE where more ice should mix in (same can be said for a large part of Arkansas). Ground temperatures are still fairly warm, so hopefully that will help travel conditions during the period. Air temperatures however will be plenty cold as the arctic cold front moves into Oklahoma on Thursday and pushes south deep into Texas.

We’ll see how well my forecast holds….stay tuned! -AT

How Long Will the Cool Start to August Last?

Flooding and Tornado Recap, Plus More Rain on the Way! 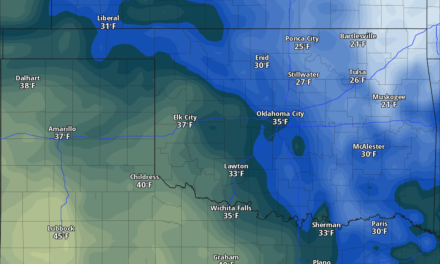 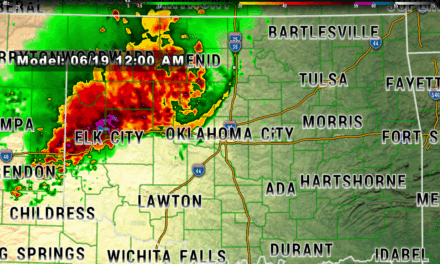