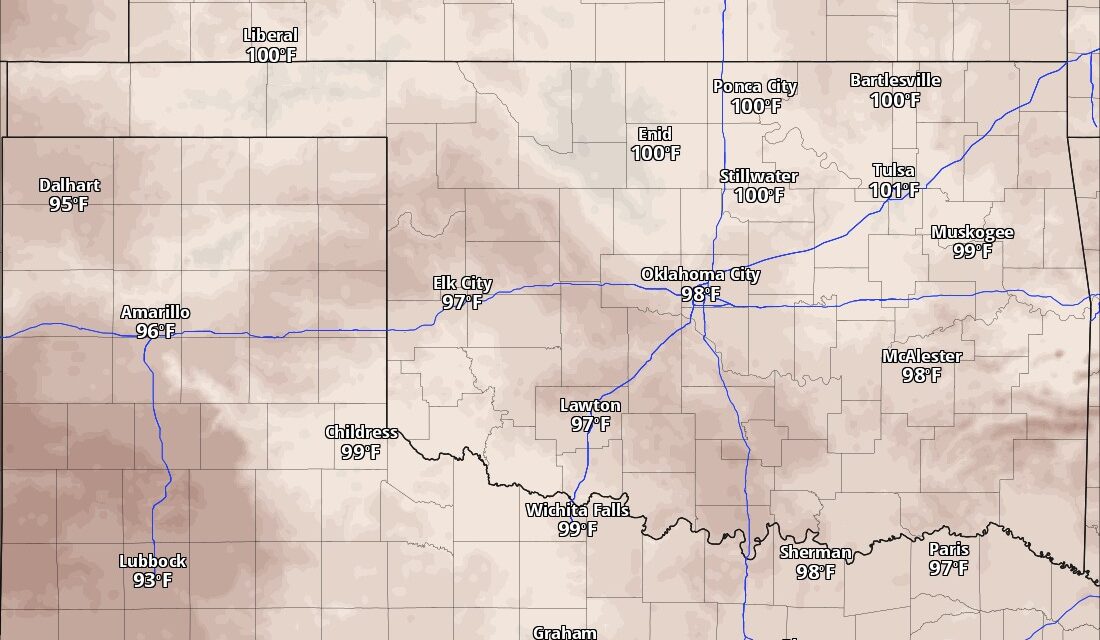 Could this be our hottest and driest week of the year? It’s starting to look that way! We’ll have another run up to 100 degrees for many folks by midweek. Any rain left Sunday afternoon gives way to dry conditions for the remainder of the week and into next weekend.

The overall upper pattern shows a ridge of high pressure has established itself across the S Plains. By the weekend, a strong trough will move across the northern states and that will drag down a weak cold front for Monday the 30th. Typically we get a little rain with these weak fronts, but this one is questionable as the models indicate the lower atmosphere appears to be too dry. At least it will help cool things down though.

Jetstream pattern for the week. 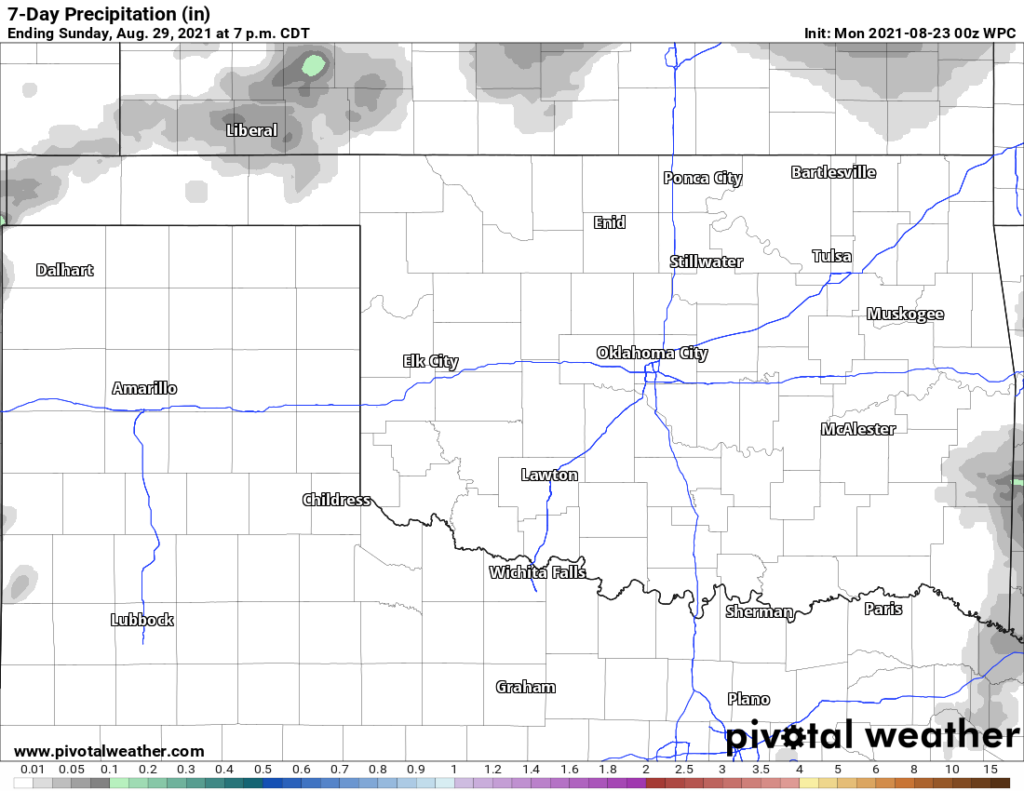 Rainfall totals through the week. 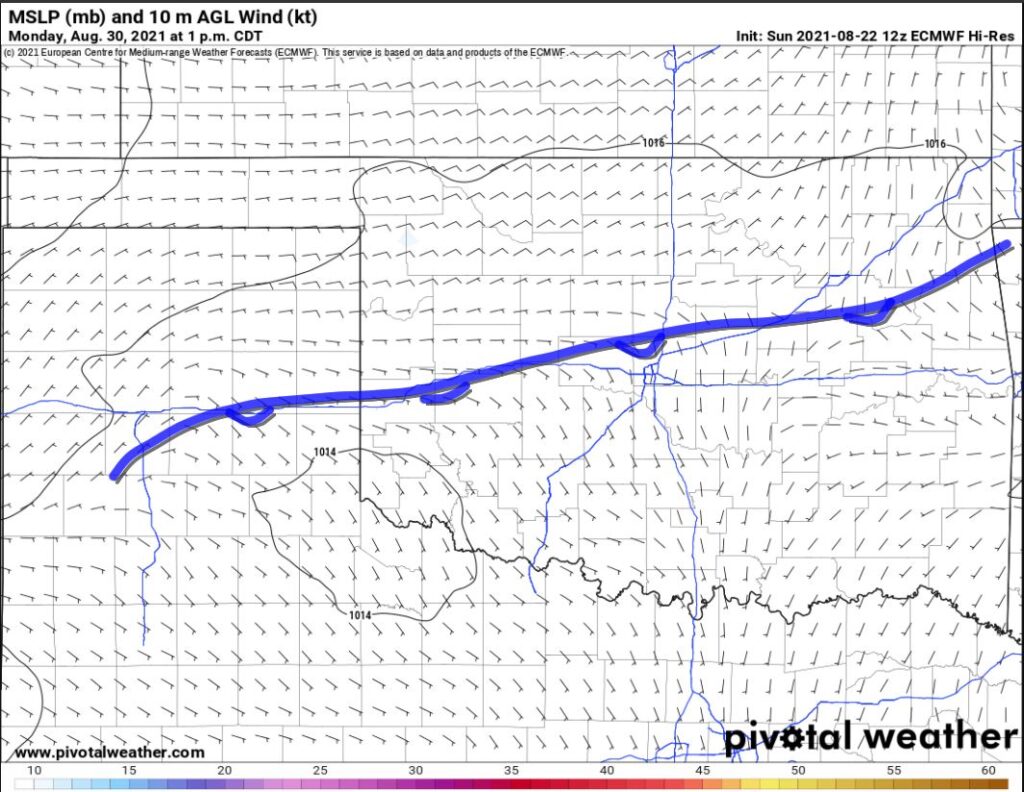 The hottest temperatures will reside across N/NE Oklahoma by Wednesday. The off/on rainfall over the month has kept OKC away from the century mark and this week as things dry out we’ll get close but should fall just short. Also the drought which has been quite tame over the summer will increase just a bit as well. 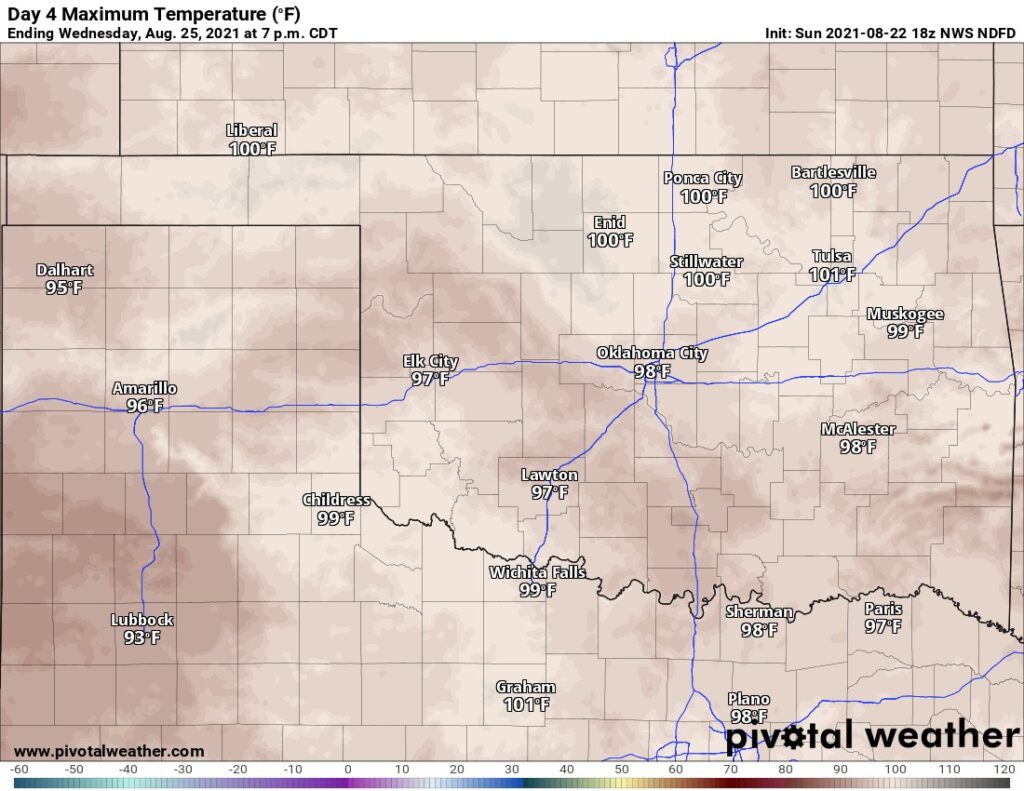 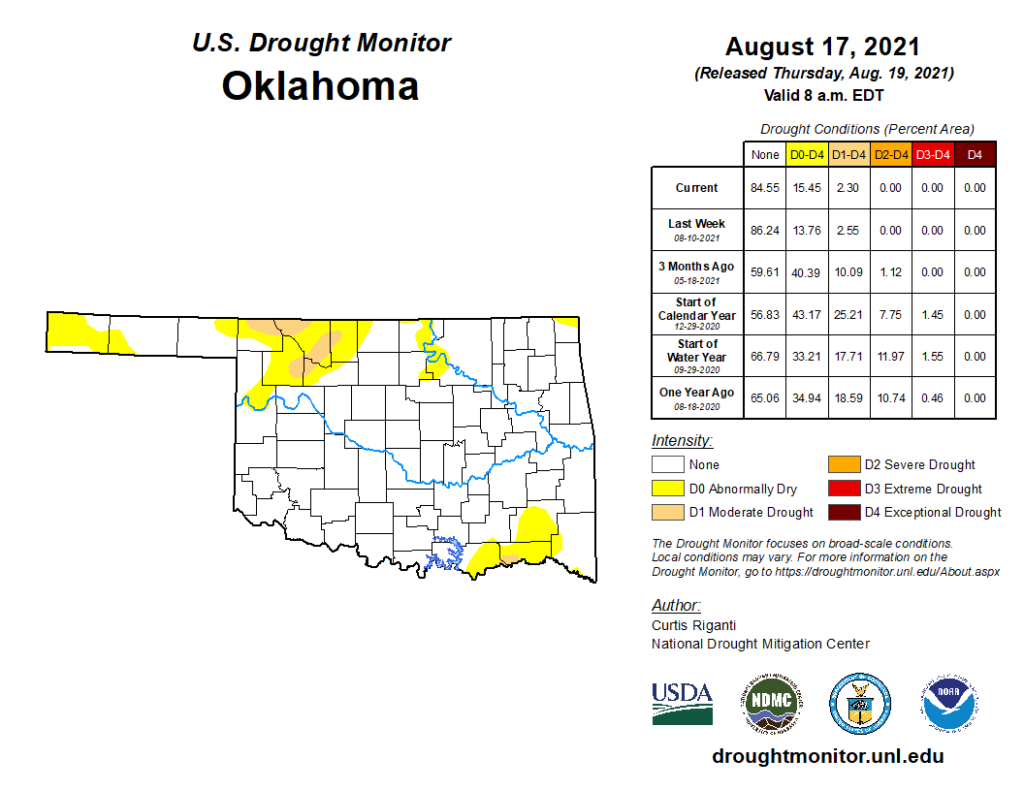 Temperatures over the coming days will be hot, but cool down a bit by the weekend. Long-range models are in a disagreement if we’ll see another run into the upper 90s the first week of Sept, or if this is it for the extreme heat. So stay tuned! 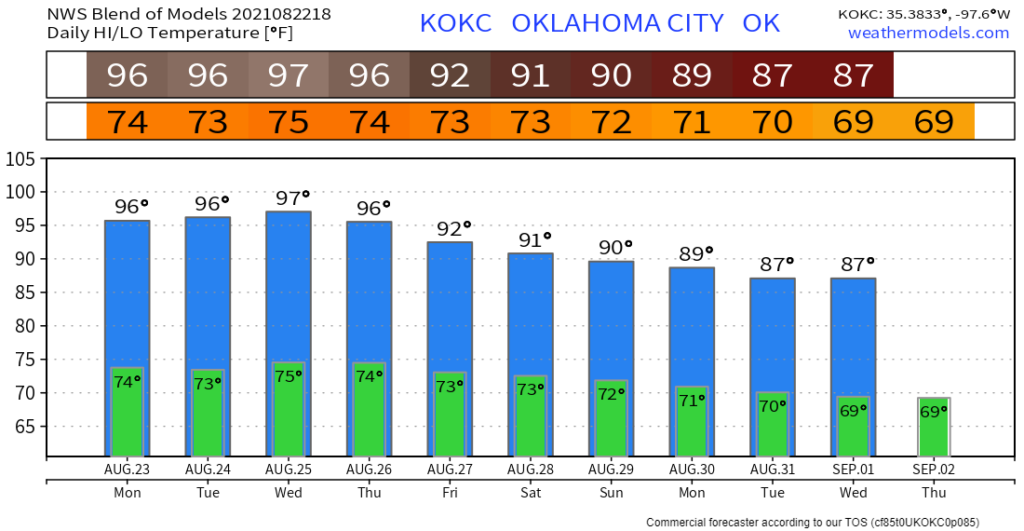 And last but not least, several of you noticed that my free weather app, ATsWeatherToGo, was missing from the Google Play Store. Google took down the app because I had a donate option listed in the menu section for my services. They apparently don’t like anything that is out of their monetary ecosystem. So I had to remove that option and upload a new version to become compliant. So you can visit the play store now and download the latest version here. If you would like to contribute a little something financially to AT’s Weather, you can do so here with multiple options. For those that have been so generous in the past, my heartfelt thank you for helping AT’s Weather succeed and grow to reach others! -AT 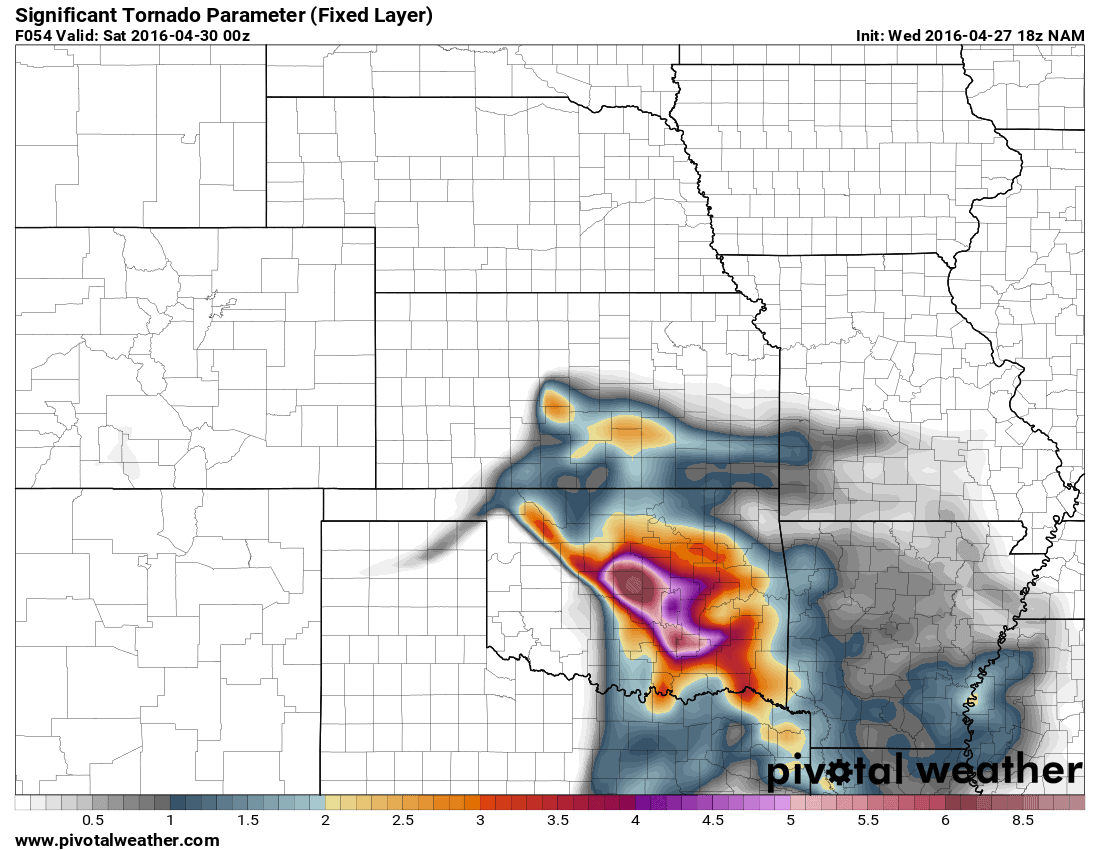 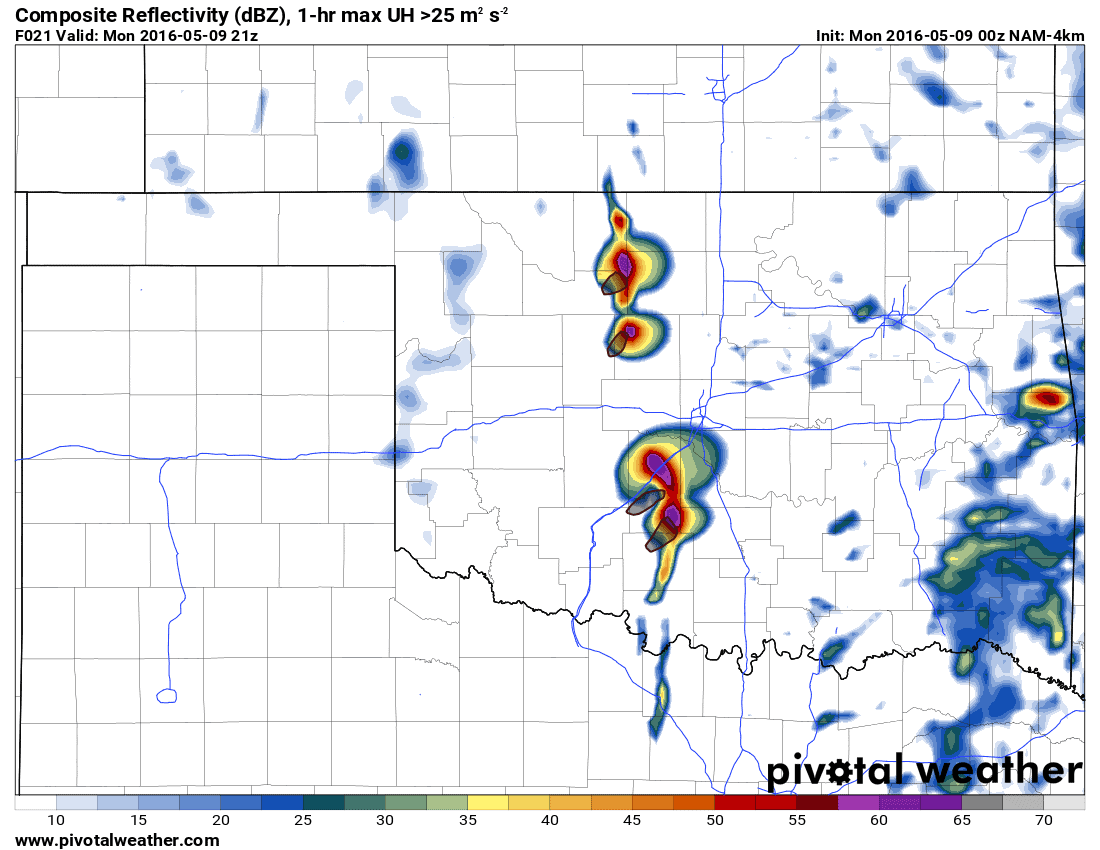 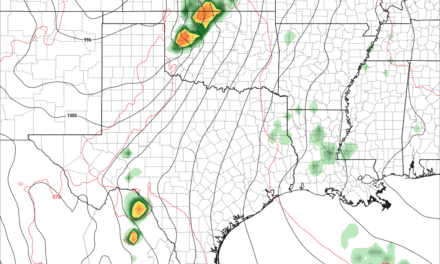