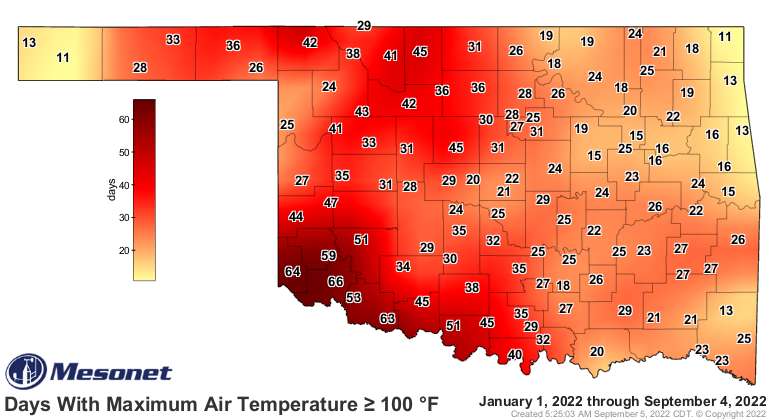 In this week’s blog we recap how our Summer of 2022 went with regards to the heat and the precipitation. We check up on the tropics. Finally, we’re in the month of September, so the Fall transition has begun!

It definitely was hot this summer, more so across the SW than the E sides of the state. Look at the number of days where we hit 100 degrees or hotter on the Oklahoma Mesonet. A full two months were spent at that level in SW Oklahoma. The other hot spot (no doubt wheat related) was in NNW Oklahoma. You can see how we average about 35 days of that kind of heat in the southwest, so this near was nearly double that.

Number of days at or above 100 degrees. 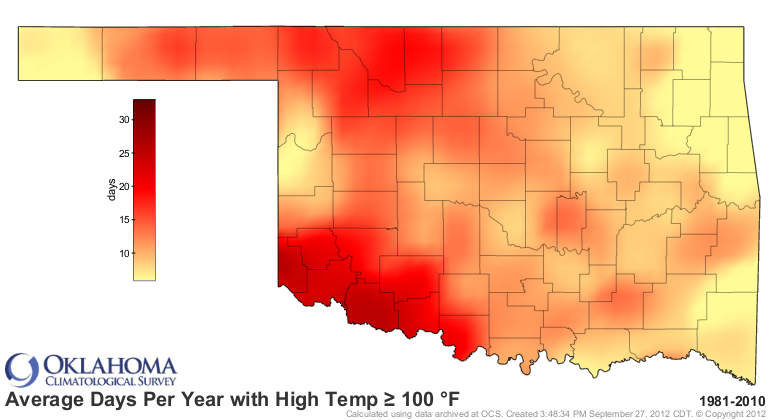 The official recording station for Oklahoma City at Will Rogers Airport hit 100/+ degrees 24 times, with most of those in July. My prior forecasts which verified for a cooler second half of August, saved us from adding to these numbers. Overall Oklahoma was hotter than normal this summer, but what about the rest of the state when you look at it as a whole? Believe it not, it wasn’t above normal at all, it was actually right about where it normally is and possibly a shade cooler when you go back 100 years. The graph below shows the summer months over that stretch of time. You can see how the summer of the 30s/50s/early 2010s, were brutal! 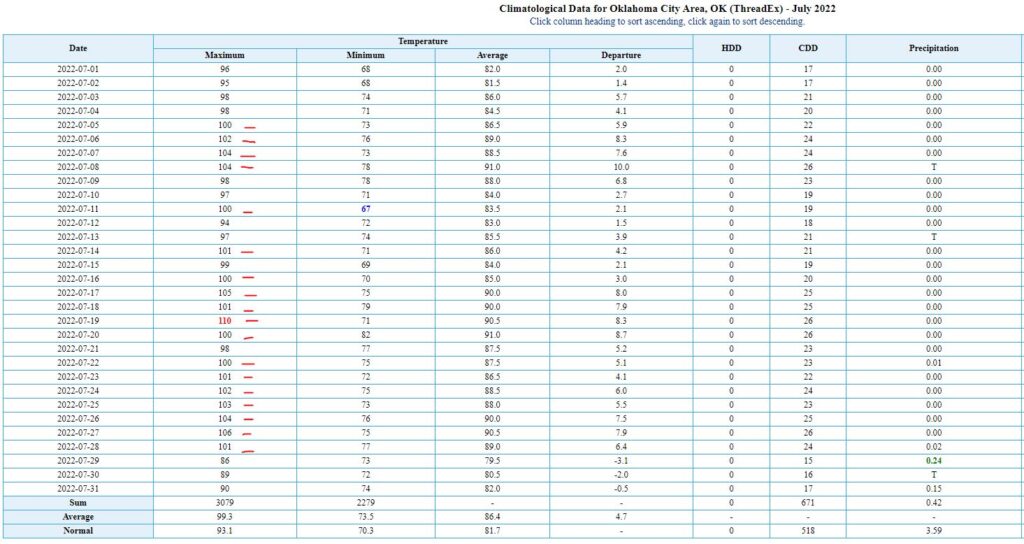 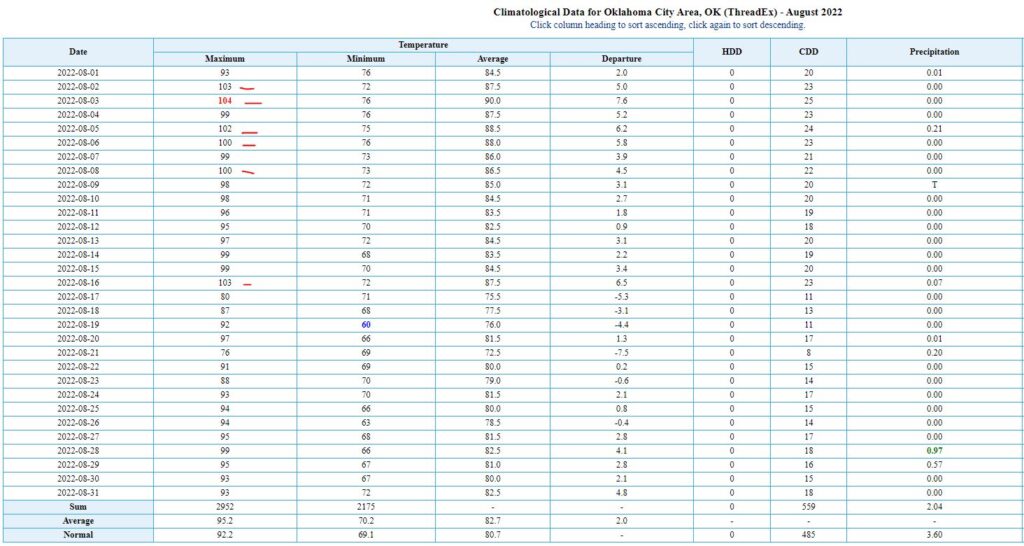 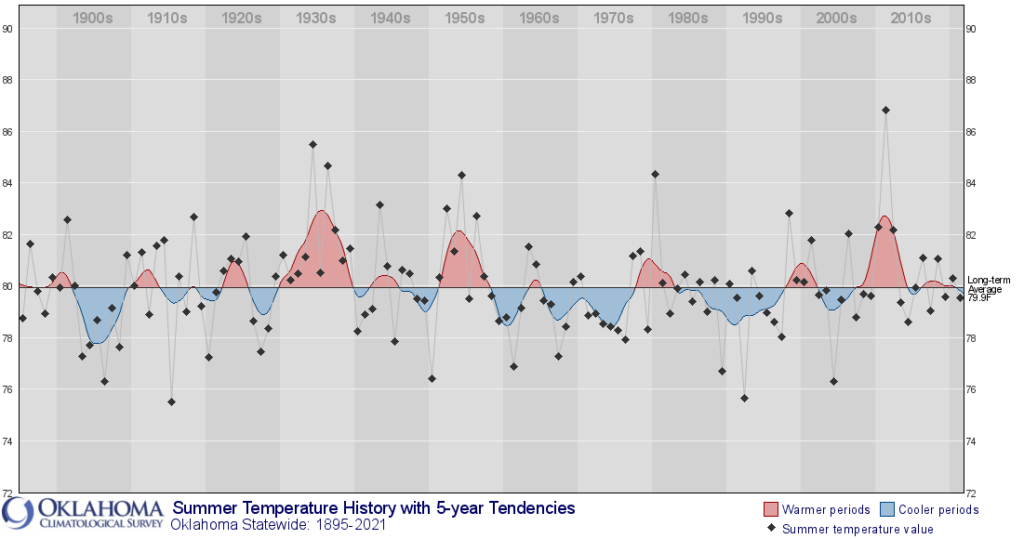 We were on track for a pretty dry summer as well and then some late season heroics saved us from the wretched outcome. Instead of regions ending 1st through 10th driest on record, we ended up marginally dry with some areas flipping to wetter. You can see how areas across the north, southwest, and even central received only 30-50 percent of the amount of rain normally received during the summer months. 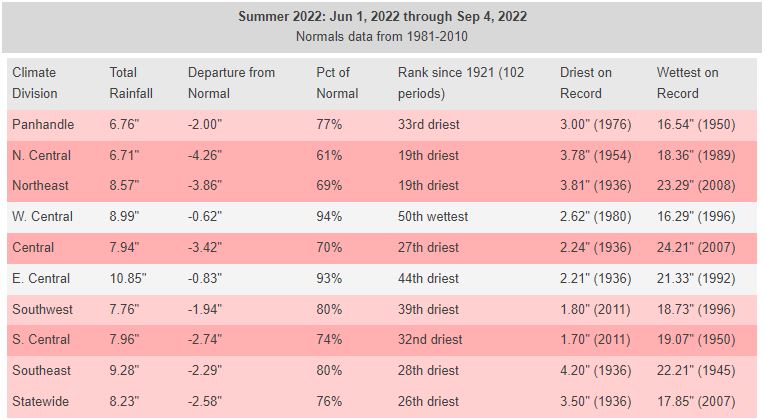 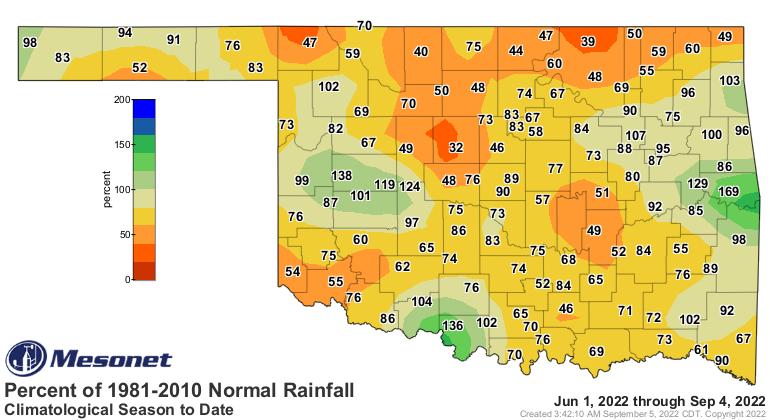 Rainfall as percent from normal.

So we mentioned the transition to Fall. If you look at the calendar, Autumn doesn’t start until September 21st. So why is there always this talk of Fall come the first of September? The National Weather Service put together a nice graphic explaining the difference. 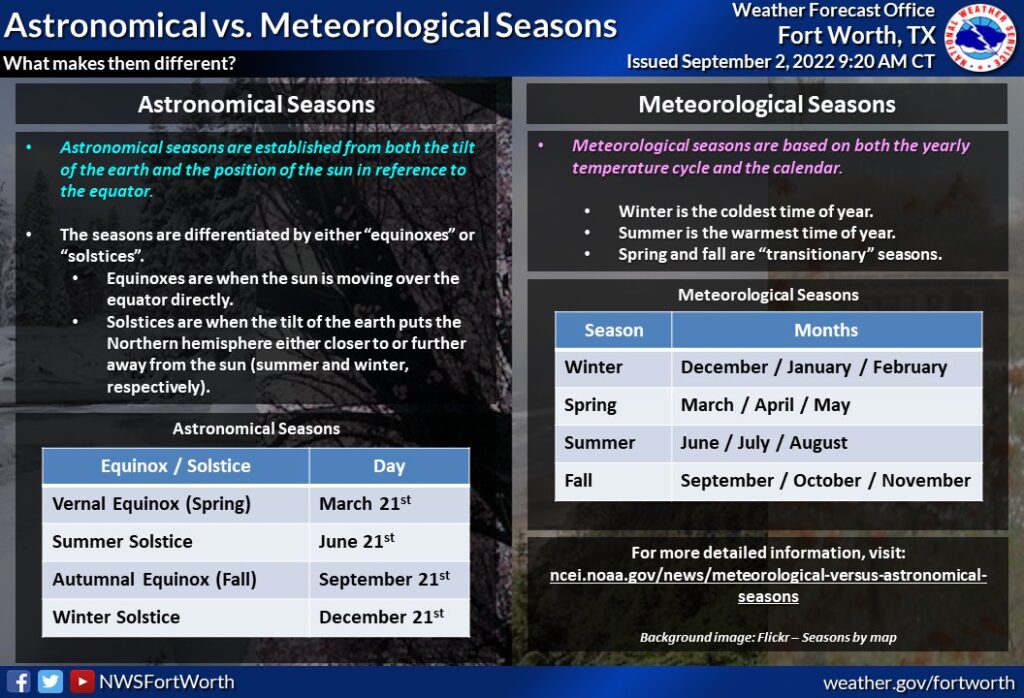 Okay, so enough about history, what’s in the future? The Jetstream once again gives us the story for the week. The upper low that brought extended rain to E OK and AR this holiday weekend will travel down to the gulf and then northeast. A new upper low will move across the plains and drag in another cold front by Sunday. This will trigger scattered showers and storms during that time. Right now the signal isn’t all that strong for widespread action, but at least some of us will receive additional rainfall. The bigger story may be the nice drop in temperatures for Sunday as we top out into the low 80s! 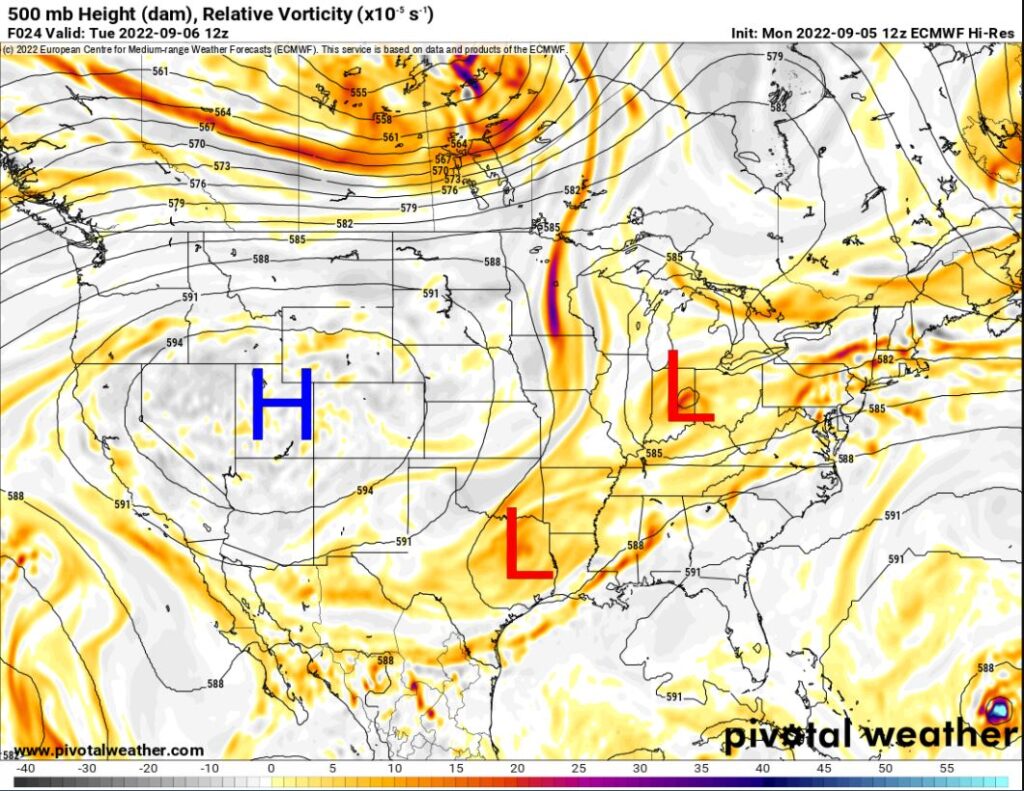 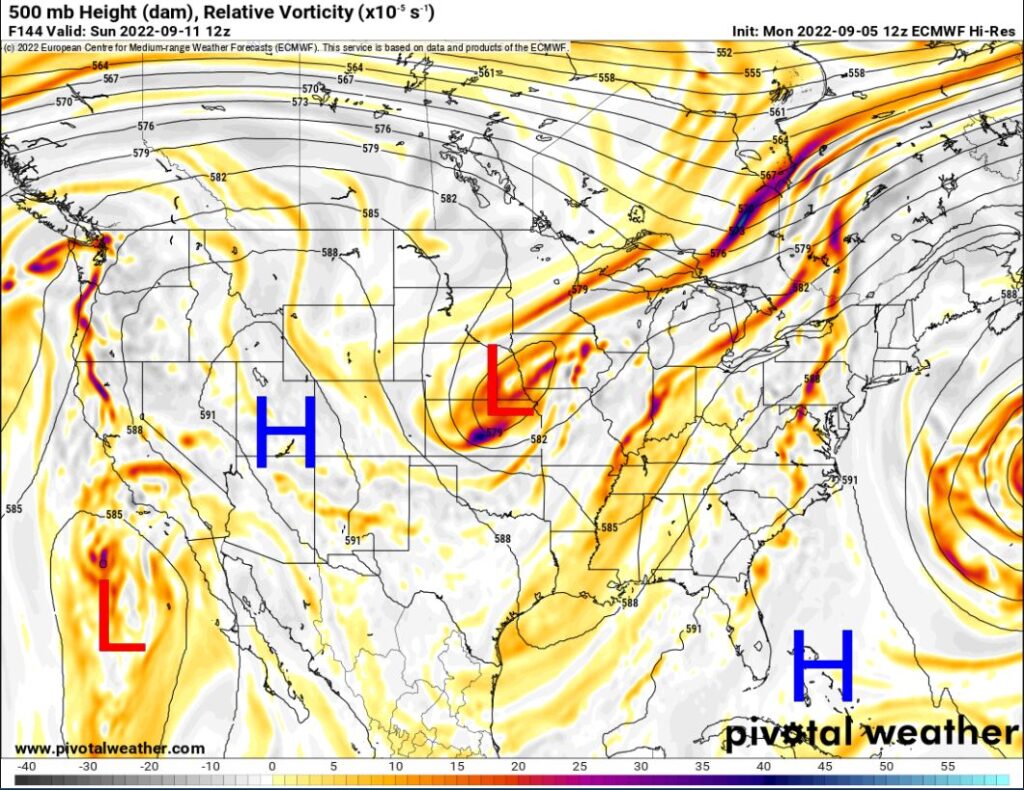 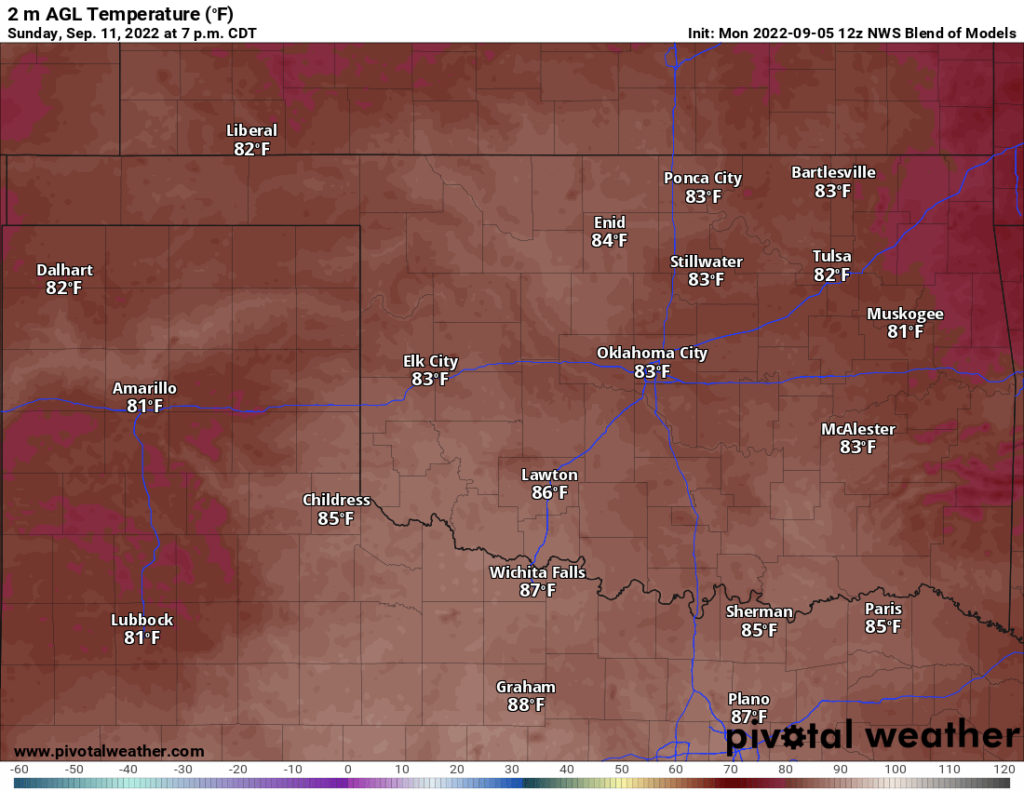 As far as OKC goes, here is the temperature trend for the next several days. Enjoy! -AT 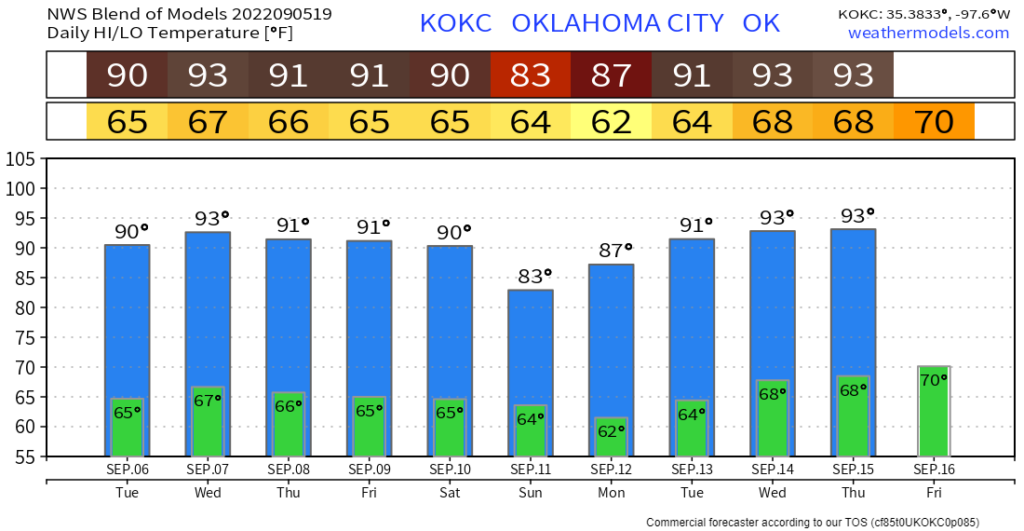 Oh, I almost forgot, hurricane season! Probably because it’s been RECORD QUIET! There wasn’t a single storm through the end of August in the Atlantic region where they typically form. There are two tropical storms out there now that are staying out to sea and not affecting anyone. I’ll keep an eye out for the Caribbean. They like to form in this region during September and October. 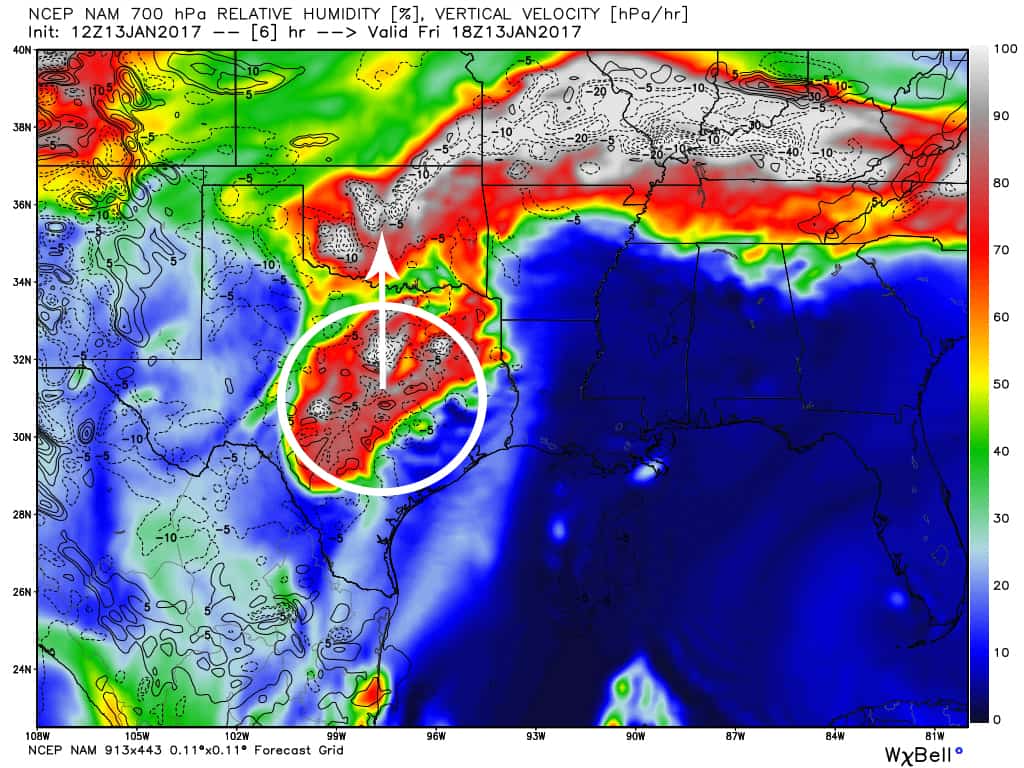 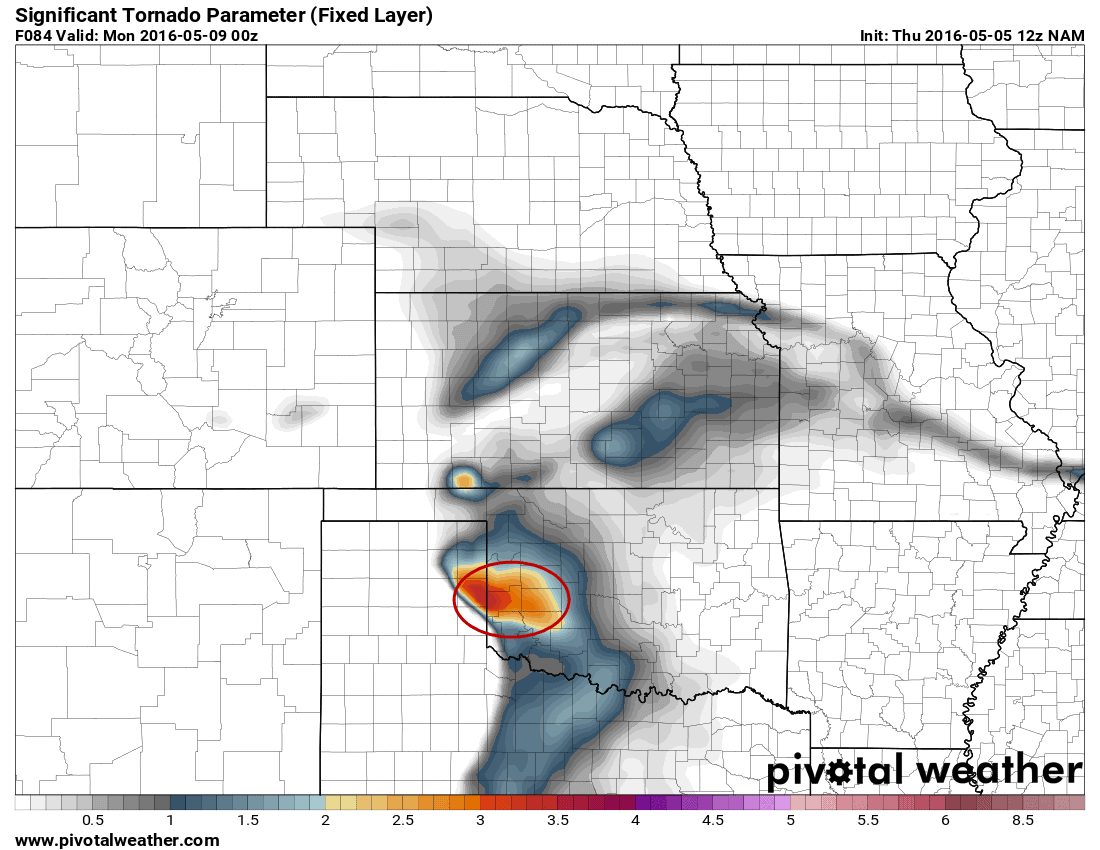