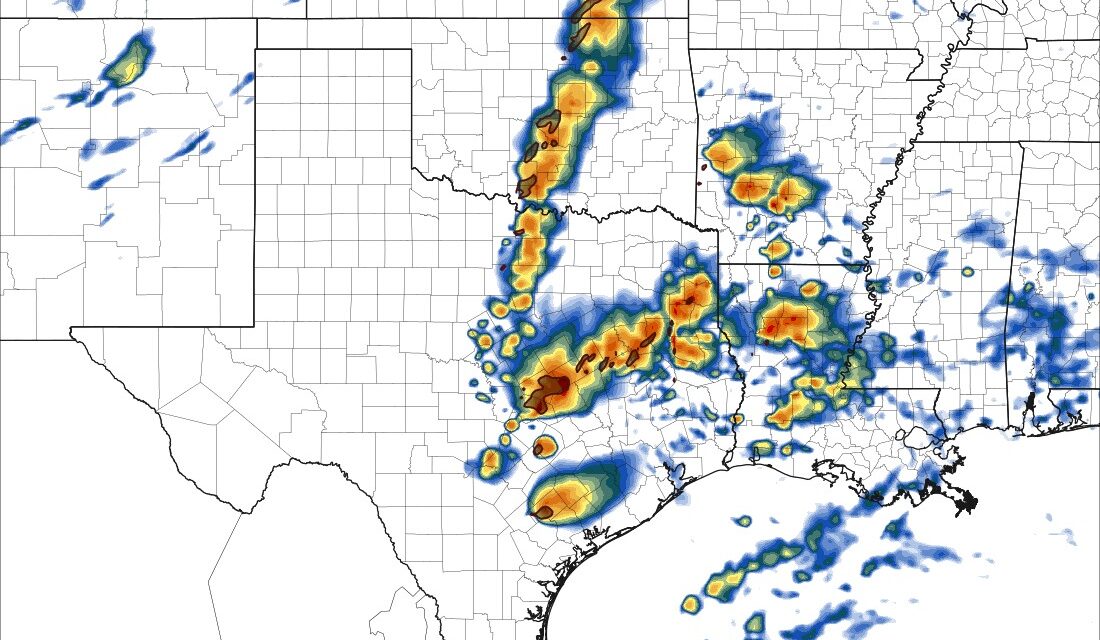 The moment is finally here. A build up of excitement in the weather community since last Tuesday for a long period of severe weather. But will it actually happen? And who will see the damaging storms? I’ll answer those questions below.

Our first round of storms will be Sunday evening/overnight. Often called the sleeper event, the day before the big day. This happens often when everyone is focused on the actual day that all of the ingredients are already in place to call for storms, and often ignore the return of those ingredients at the last minute, the day before. Models have hinted at this occurring since Saturday morning in the data. What this means is that we should see at least isolated severe storms develop across C OK Sunday evening and those would travel E/NE into NE OK. The storms will be capable of large hail in excess of 2″ in diameter. If the supercells can anchor to the frontal boundary along the I-44 corridor, then a couple of tornadoes would likely occur. That extends from the C OK region to NE and does potentially include both OKC and Tulsa metro areas. Another outcome is that too many storms develop late evening and shove the front south undercutting the storms. This would lessen their severity and remove the tornado threat, but still keep the hail threat going. The Jetstream map shown highlights the upper disturbance. 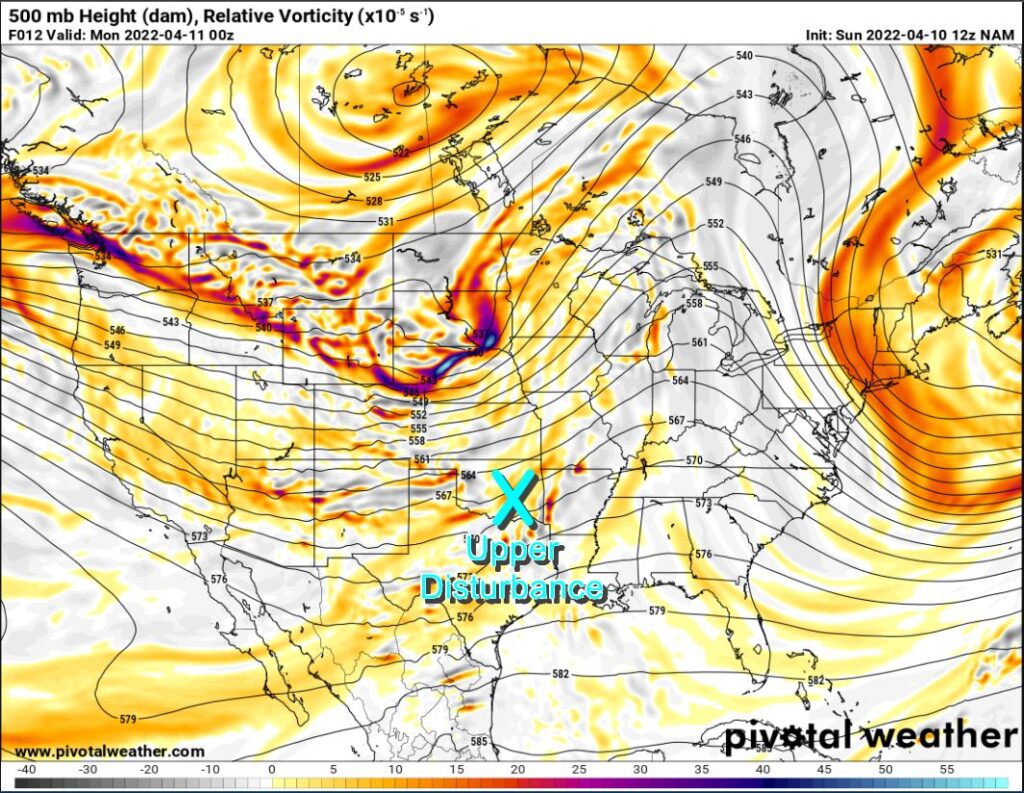 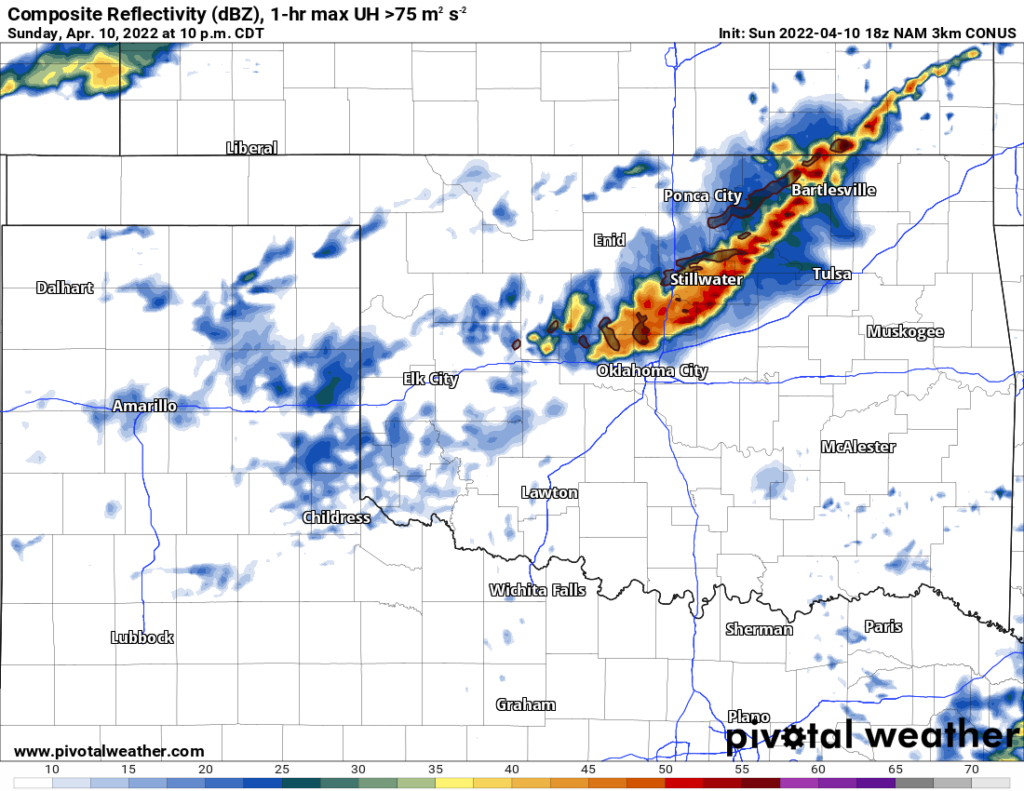 Our second wave of severe storms will occur on Monday late afternoon/evening across far E/SE OK. Literally the last counties in the state. As most of the severe storms will occur in Arkansas instead. Some will also develop across N/NE TX as well. Hail is most likely for the TX storms, but for the sliver of OK and a good area of AR, expect the tornado threat. 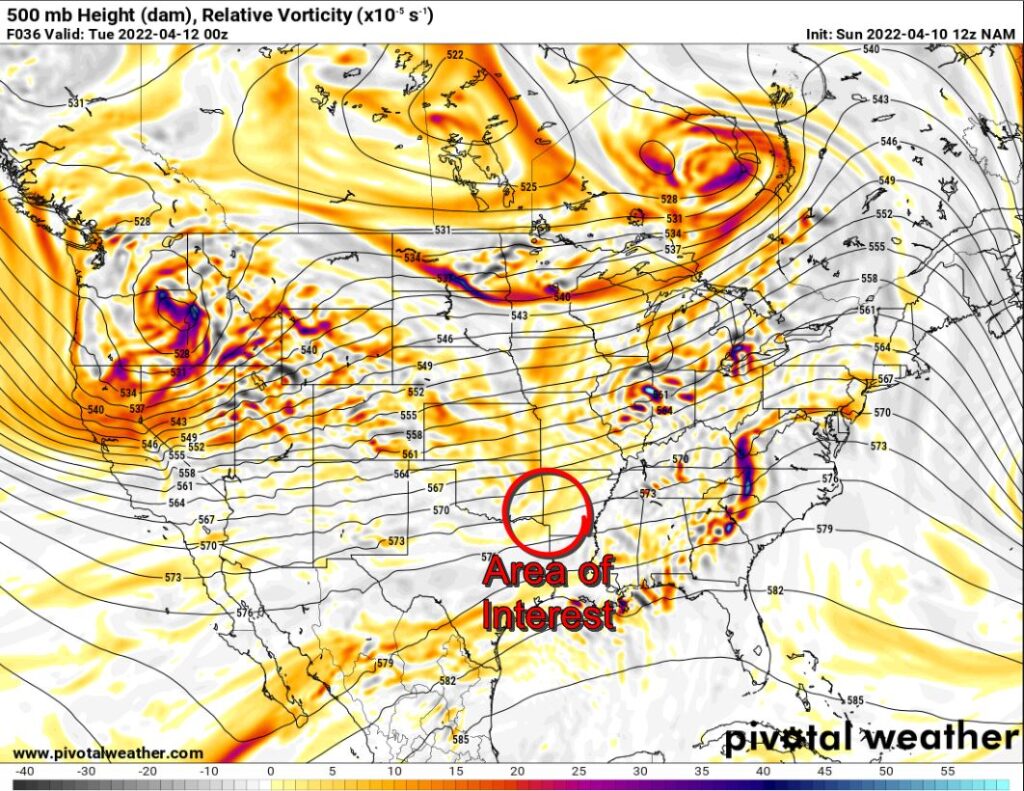 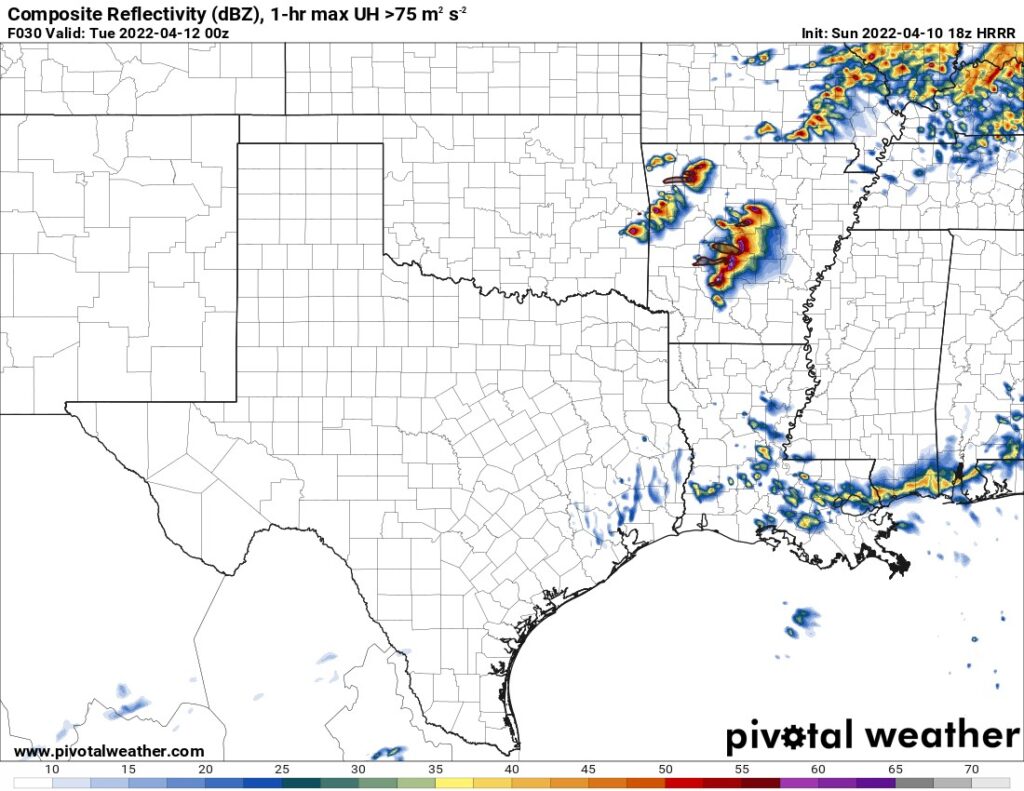 Supercell storms should fire from far E/SE OK into AR.

The third wave of severe weather is along and east of the I-35 corridor on Tuesday. It is actually the best day of severe weather ingredients. But does that translate to guaranteed severe tornado producing storms? Not necessarily. At the time of this blog, we are just outside the 48 hour window and a lot can change between now and then. One of the factors that may blow the whole event is a strong upper disturbance moving through Texas early Tuesday triggering widespread clouds, scattered showers and storms. Should this occur, some of this rain cooled and subsident (sinking) air would travel north into OK killing our chances for severe storms. There will already be a CAP in place that helps to prevent or limit storm development. And as discussed in my live broadcasts, there appears to be very little to non-existent convergence along the dry line. All of these factors could contribute to prevent storms in the majority of the state. Watch for my lives and latest posts, as I update on this potential outcome. 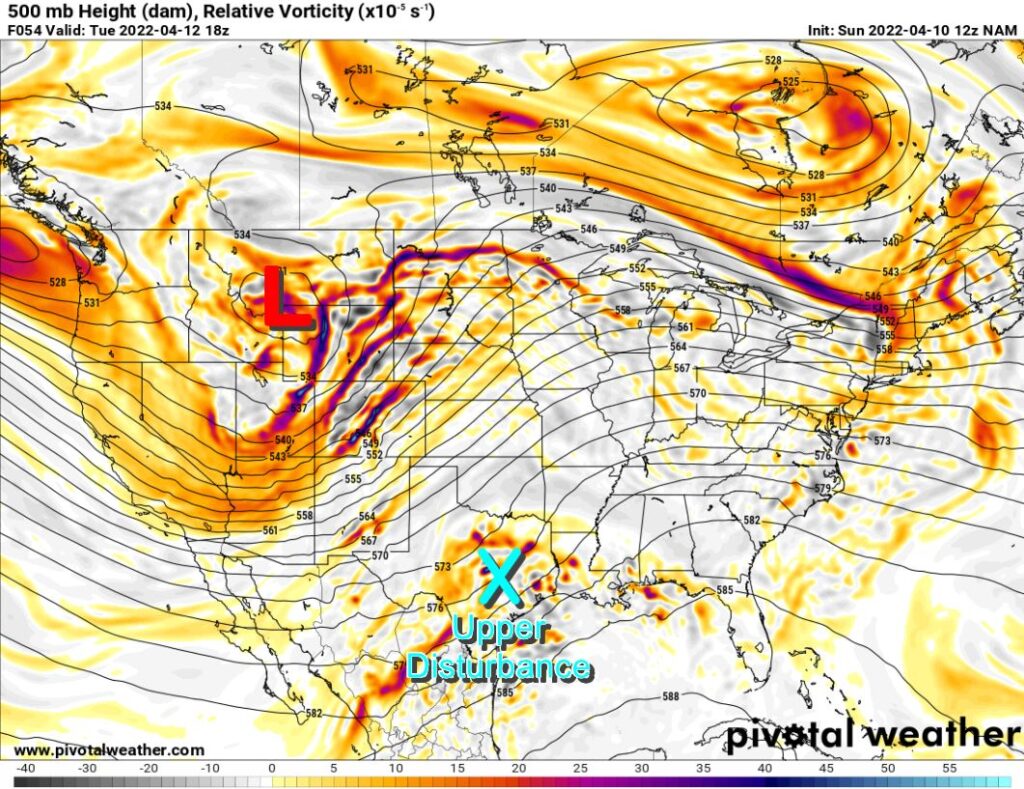 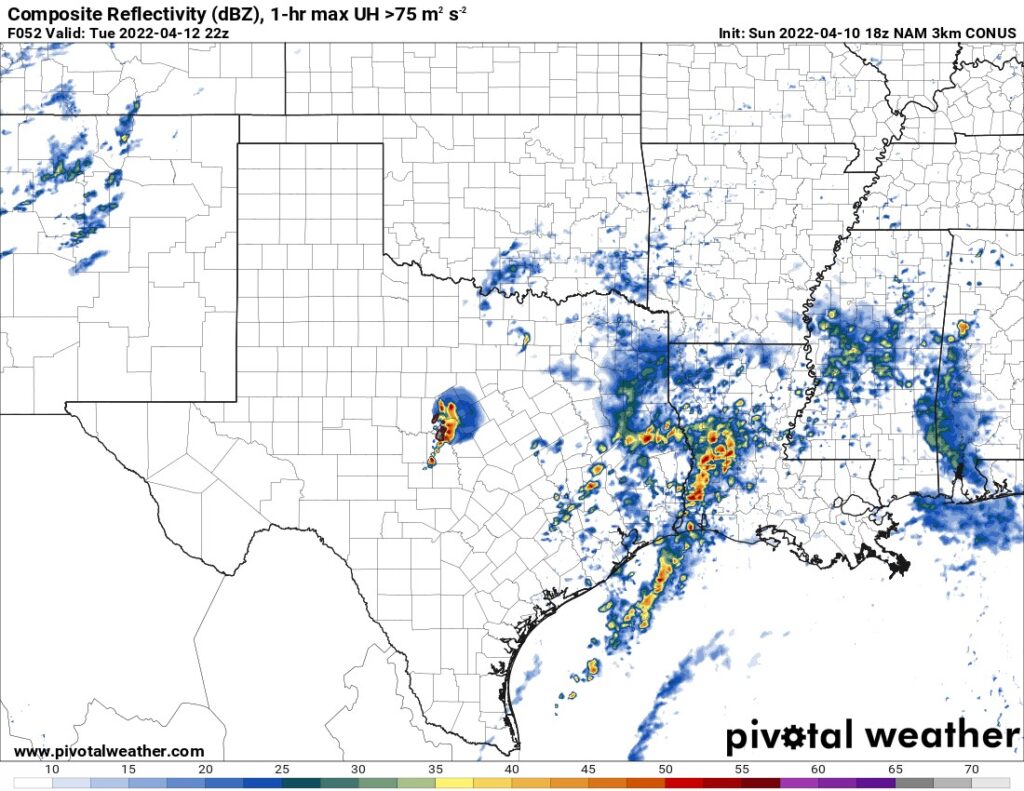 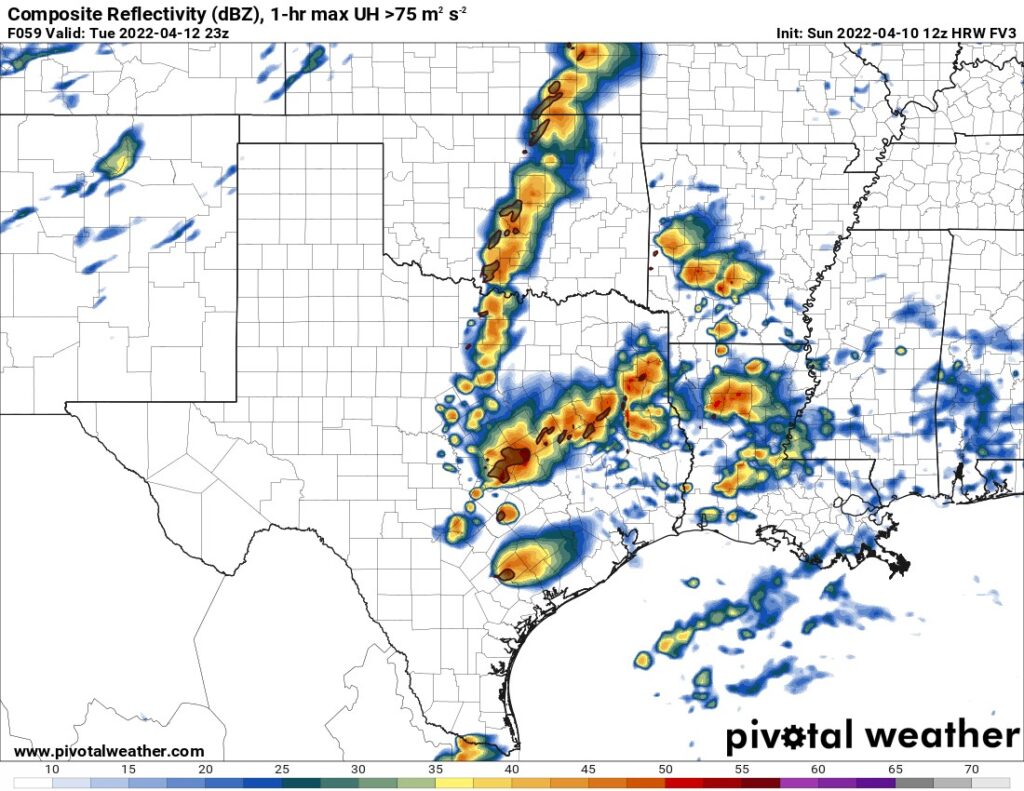 Finally the entire system rolls through with our final wave on Wednesday. Also as discussed in my lives, the storm system is coming across too early in the day which forces all of the severe weather components to line up in Arkansas. So Oklahoma doesn’t have much of a chance to see severe weather that day, although should see a few showers and storms early afternoon move through the E half. 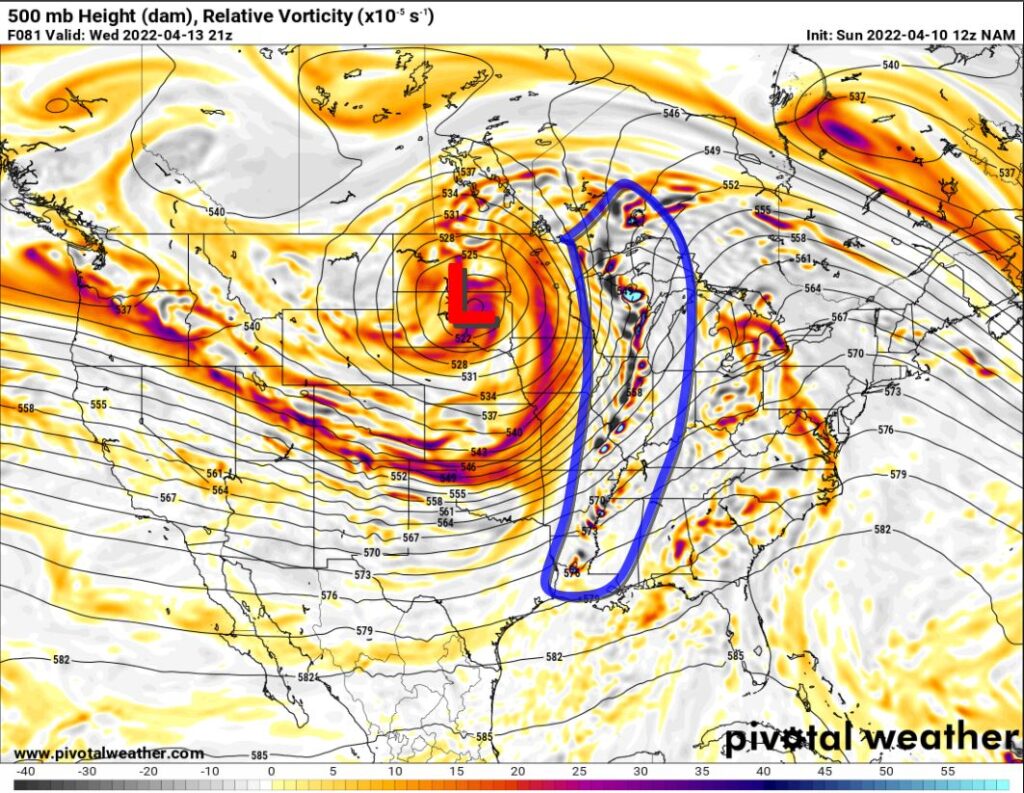 So that’s it for this severe weather threat period. A few showers and storms will occur potentially Friday and Saturday. Models differ on the outcome and are having a hard time deciding if there will be enough moisture around for anything significant. I’ll monitor and update you throughout the week. In the meantime, the accumulated rain from most of these storms shows how Oklahoma doesn’t get much over this period of activity. 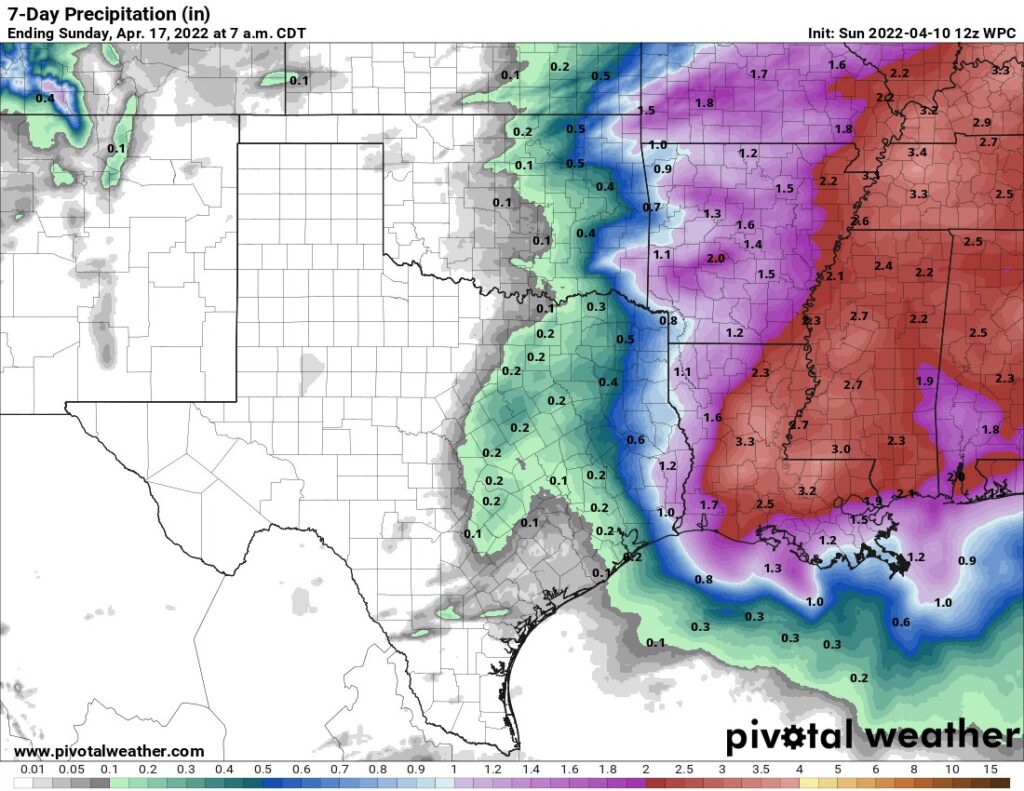 Model blend of upcoming rainfall through the week.

Temperatures will be mostly nice during the afternoons, but definitely some cold mornings ahead. Pay attention to those cold mornings for any sensitive plants you may have set out. 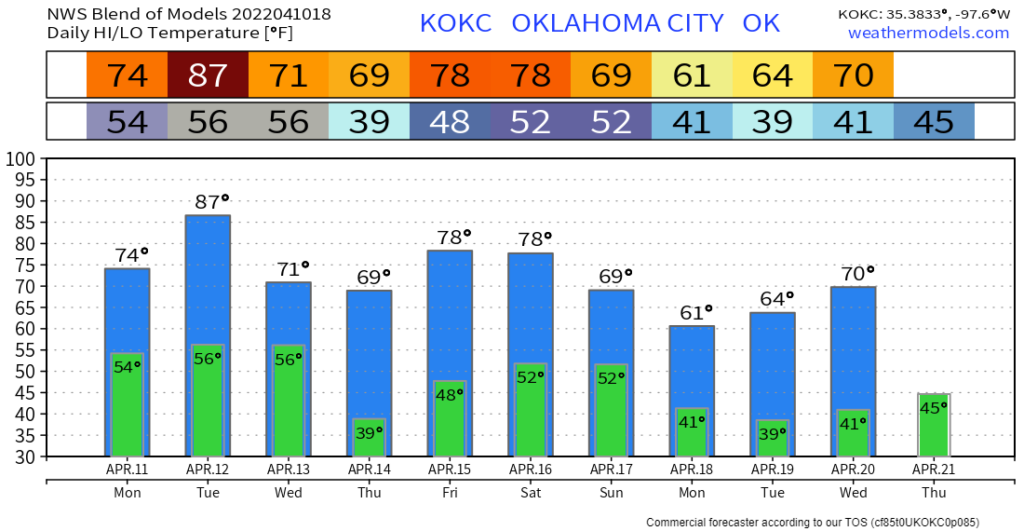 Be sure to download my free weather app now, ATsWeatherToGo, from the app stores. It will predict tornadoes up to 15 minutes before they occur, giving you more time to prepare. Other apps can’t do this, so take advantage of it. Also mention it to any loved ones or friends that may be in the severe weather areas above, as it works all across the country to keep people safe.

Quick reminder to also to tune into my live broadcasts to discuss the weather forecast or to cover severe storms as they happen. You now have four platforms in which to watch; YouTube, Facebook, Twitter, and now Rumble. When GabTV Live gets going, I may move away from Twitter to them unless Elon Musk dramatically changes things over there. If you’re having trouble getting notified in time on Facebook, you can Opt-in to get notified by me directly when I go live on the next broadcast here: Opt-in Weather Updates.

As always, thanks again for your continued support.

Oh before I go, one last thing. On Thursday, April 14th, at 8pm, I’ll be hosting an event on facebook called the Severe Weather Classroom. It’s 30 minute weather presentation on severe weather that includes tornadoes, hail, wind, flooding, lightning, and how to keep you and the family safe. It’s followed by another half hour of Q&A. So it’s definitely a family affair. Be sure to RSVP by visiting the page: FB Live Event Wx Classroom -AT 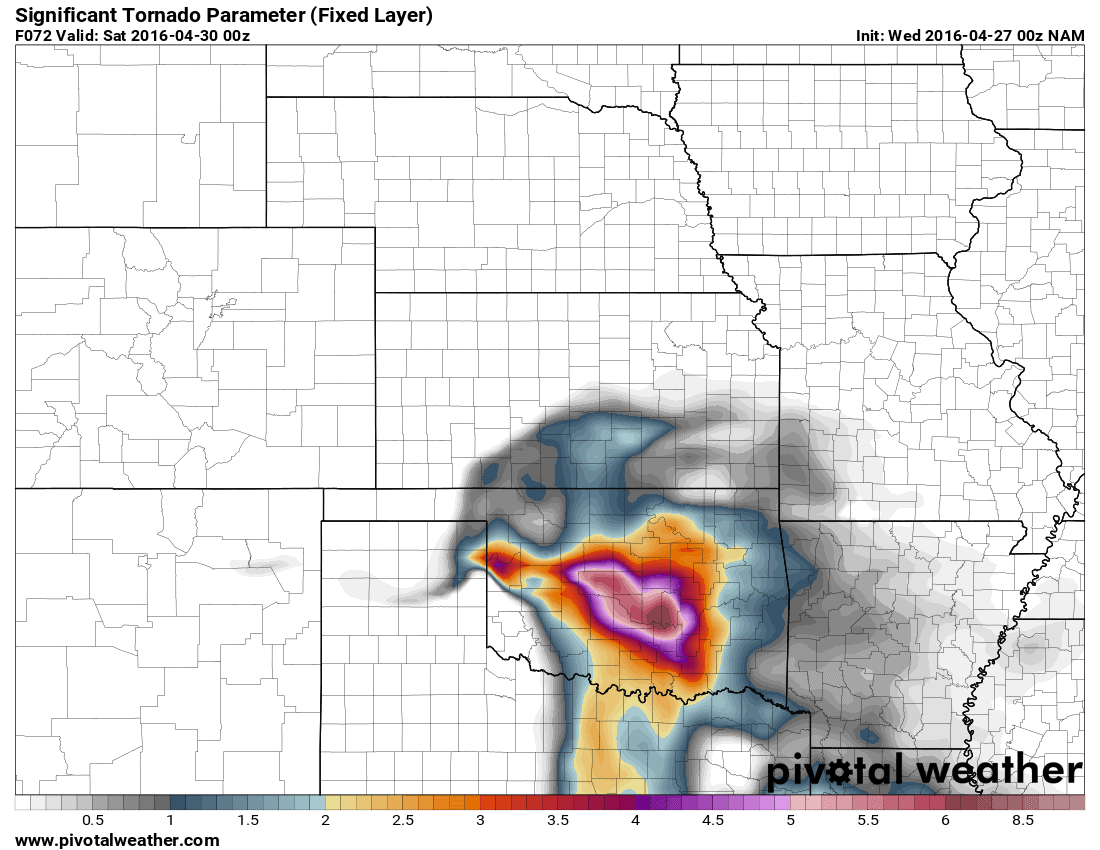 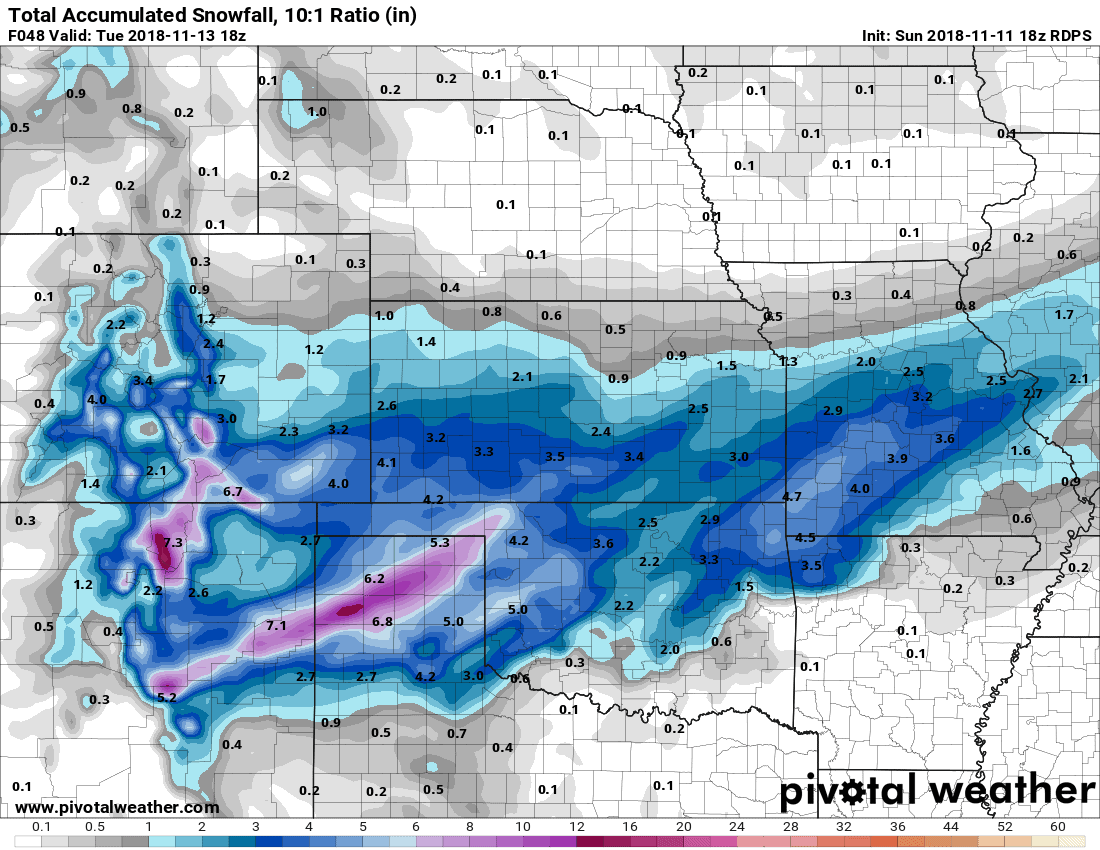 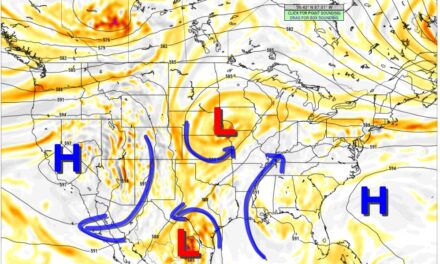 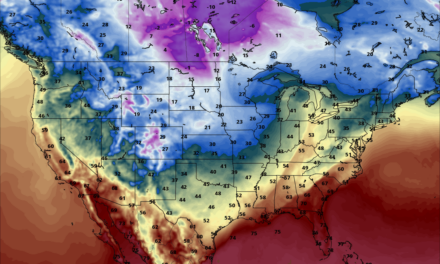 Can't wait for this to become a routine occurrence! I ❤️ Fall!

You and me both! Literally burnt out!

Fall is my favorite time of year.

Dam we sure need rain

Should be, sometime in December, I'm sure.

Just moved from a mountain in NC. Loved watching the leaves turning in the fall!

Any rain in sight?

Are we going to have more than 7 days of fall this year?

Tired of Summer so ready for Fall

Me too! It is hot down here in Lawton

Then it’s back to the 90s! Seriously when is this summer ever going to end??I can’t remember it being this hot this late. It’s almost October! 

When is that gonna happen??

I wore a hoodie to work today 🙌

Is this the temps right now

What a difference the cold front made! Places in the SE still hit 100 this afternoon while the NW never got out of the 50s.

That needs to keep on heading south to Texas!

I hope you're right.

So over this heat 😒

I pretty much hate Oklahoma weather until late October or November. Questioning why I live here and not the mountains.

Done, done, done with this heat!!

Well it was 97 in my house today in Enid!

I didn't go outside today, I didn't realize it was that hot 😬

I sure would like these temps to "fall" off. Danyel Fontaine King

I can’t wait for winter to get here, so I can complain about how cold it is.

So over this weather

So this is an abnormally hot year. What is the high temp around this time normally?

I am officially done with the Hate posts hahaha I need SNOW!!

Must be the Texan in me, but I thought it was pretty nice out today 🤣

Summer don't want to let go because it knows what a sad winter we are fixing to have and I'm not talking about the weather.. winter of death..

Here are the 11 AM EDT Sep 23 Key Messages for Tropical Depression Nine. Strengthening is forecast in the coming days, and residents in Cuba and Florida should ensure they have their hurricane plan in place.
For the latest updates: http://hurricanes.gov